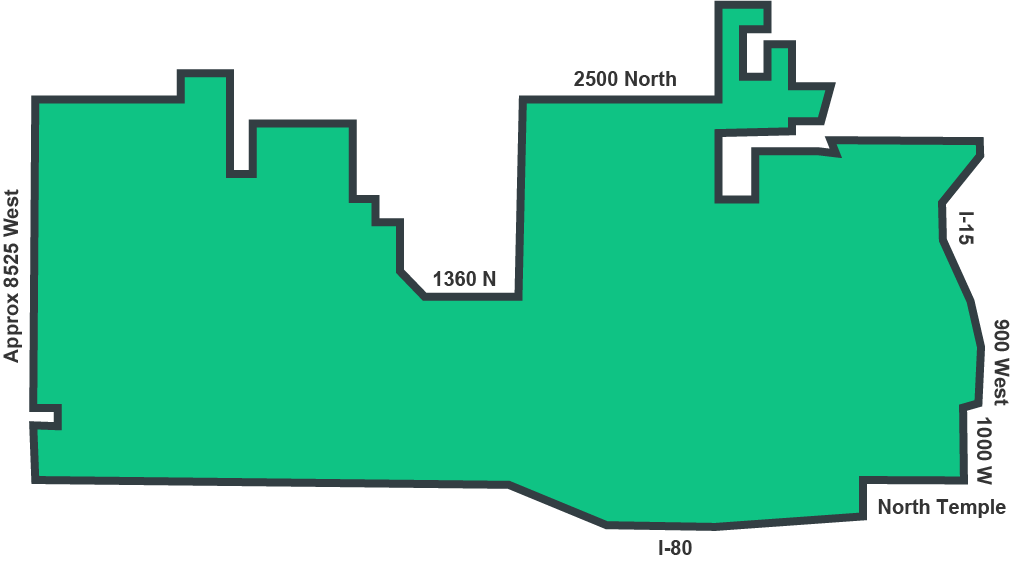 District 1 is located west of Interstate 15, and north of Interstate 80. It’s the first impression millions of visitors a year have when they enter the City, as the Salt Lake International Airport is within its boundaries. A quick ride on the Green Line TRAX Line, which opened in 2013, will take you past many of our local businesses along North Temple and connect you right to Downtown.

The largest geographic district of all Seven of the City Council Districts, District 1’s diversity includes farms, business, and industrial parks, community centers, and natural treasures like the Jordan River Parkway and Farmington Bay Waterfowl Management Area. A particular favorite is the Utah State Fairpark, which is a wonderful community gathering place for tens of thousands of Utahns, with its concerts, fairs, and rodeos each summer.

Posted on:October 25th, 2021
Looking for more events and activities in Salt Lake City? Check out any of the following links to see what's happening near you. [...]

Posted on:May 18th, 2020
The Salt Lake City Police Department has special officers devoted to grassroots problem-solving within the community. Community Liaison Officers attend monthly community council meetings within the City’s seven City Council Districts. While these officers share and receive a lot of information at these meetings, it is daily interaction with residents that fosters the trust necessary […]

Posted on:May 18th, 2020
Attend monthly meetings to find out what's happening in your community and how to help build a better neighborhood. Locate your community council on the City's representation map. [...]

Posted on:May 15th, 2020
A master plan details the vision, policies, and framework developed by the community that guide growth and development in a neighborhood over a period of time. View the master plans for District 1. [...]

Posted on:March 21st, 2019
What do you love about the WESTSIDE? See what your neighbors are saying.

Posted on:April 10th, 2018
Jordan Meadows is a neighborhood, located on the West side of Salt Lake City. Jordan Meadows is what’s known as a minority majority neighborhood. Which means more than half of residents represent social, ethnic, or racial minorities. The neighborhood is growing! With development along the North Temple corridor and in the North West Quadrant, there […]

Posted on:April 10th, 2018
Located in the area north of 600 North from Interstate 15 to Redwood Road, Rose Park is among the most ethnically diverse areas in Utah. The Rose Park Neighborhood is a post-World War II development whose name comes from the area’s original developer, Alan E. Brockbank. Brockbank designed the streets layout to look like a […]

Posted on:April 10th, 2018
Westpointe occupies the northwest portions of Salt Lake City, just minutes from downtown Salt Lake, the Salt Lake City International Airport, and Interstate 15. The Westpointe neighborhood offers its residents a more rural lifestyle while still giving them access to all that city life has to offer. Westpointe is one of the most affordable neighborhoods […]

Posted on:April 10th, 2018
Salt Lake City has a history of caring for and stewarding parks dating back to the dedication of the first major public park in the City, Liberty Park, in 1882. It stands as an example of a public park that serves a multitude of uses while preserving urban green space. Salt Lake City’s Parks Program […]

Posted on:April 10th, 2018
Located at 1037 West 300 North, Fairpark Community Garden is shared with the Wasatch Community Gardens’ Youth Garden Program. The produce grown is donated to local food pantries in Salt Lake and the gardeners get to take some of their hard work home with them to enjoy. The area was used as a State Fair […]

Posted on:April 10th, 2018
The garden is located at 871 North Cornell Street (1525 West). Community members who contribute the Rose Park Community share in about 4,000 pounds of organic produce each season where there a celebration held and a donation to the Utah Food Bank takes place. Visit the garden’s website.

Posted on:April 10th, 2018
The Day-Riverside Library was designed to complement the Rose Park neighborhood while remaining sensitive to the Jordan River Parkway. The south property of the Day-Riverside Branch is home to TreeUtah’s EcoGarden, a “food forest” where all members of the community can learn about urban farming and organic gardening. Visit the library’s website.

Posted on:April 10th, 2018
Winding through Westside neighborhoods, the Jordan River Parkway provides a north / south corridor exclusive to bicyclists and pedestrians. All Westside resident are less than a mile from either the river or a neighborhood park with recreation facilities (baseball fields, playgrounds, etc.) and over 80 percent are within a quarter-mile. The Jordan River is an […]

Posted on:April 10th, 2018
Prior to the completion of Interstate 80, the North Temple corridor was the primary route to the Salt Lake International Airport. After I‐80 was completed, traffic was able to bypass North Temple in favor of the highway. Today, the street serves as the major surface street connecting Downtown to the neighborhoods and businesses in the […]

Posted on:April 10th, 2018
The Northwest Quadrant, Salt Lake City’s Western edge, includes approximately 28,000 acres of land, which accounts for about 40% of the total area of Salt Lake City. It lies between 4000 West to the west City limits (approximately 8800 West) and from 2100 South Street to the north City limits. It is adjacent to the […]

Posted on:April 10th, 2018
Nestled in the Northwest corner of the Salt Lake Valley, just minutes from downtown and the Salt Lake International airport, Rose Park is well-known for some of the finest bent grass greens in Utah. A variety of pine and willow trees frame most fairways, requiring accuracy off the tee. With subtle dogles and well-manicured fairways, […]