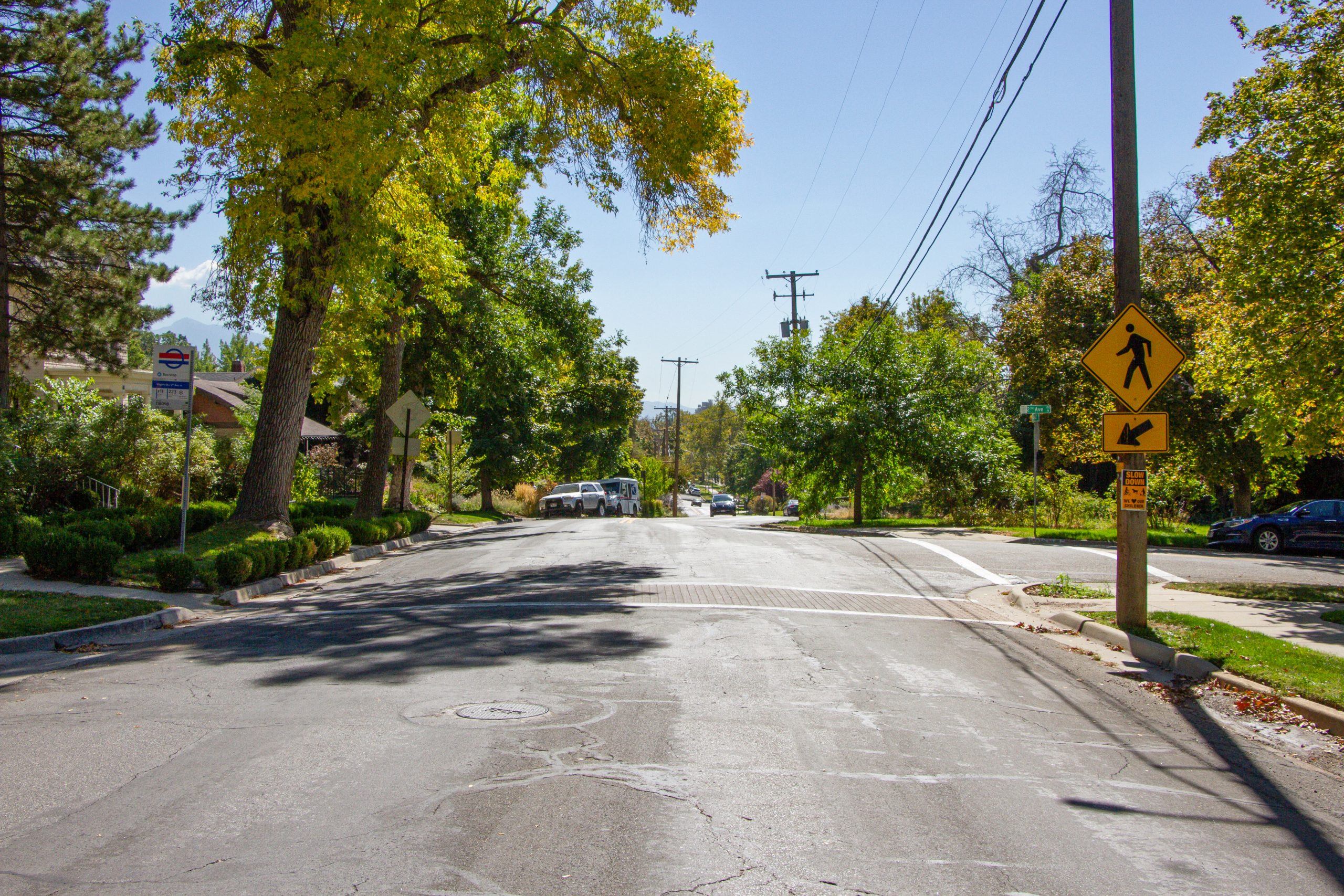 [Update: January 2023] The comment period is now closed. Thank you to all the community members that commented and shared their voice. The project team will now review the comments we received and finalize the design concept.

Virginia Street from South Temple to 11th Avenue will be reconstructed in 2024. The pavement, sidewalks, and gutters will be fixed.  There is also the possibility for changes to the street design.

The draft concept design is available for review and comment.

The concept design is based on feedback from the public collected during several outreach efforts in 2022, evaluation of existing roadway and traffic conditions, and feasibility of implementing changes within City right-of-way. Key components of the draft concept include continuous sidewalks on the west side, uphill bike lanes, traffic calming elements, improved bus stops, and intersection improvements. The implementation of all elements shown in the draft concept design are dependent on engineering review and design and funding availability.

On-street parking availability on Virginia Street will change as a result of this project. All on-street parking on the east side of Virginia Street will be removed. The width used by the existing parking aisle is needed in this narrow corridor in order to provide the other roadway elements included in the project. Although parking will remain on the west side of Virginia Street, there will be no parking allowed on the blocks where the sidewalk is being proposed: South Temple to 1st Avenue, 1st Avenue to 2nd Avenue, and the northern block of Crestline/Fairfax to 11th Avenue (although the project team is evaluating whether parking could be added on this block due to the wider roadway).

What is being done to slow traffic?

Speed cushions are proposed along Virginia Street to help reduce vehicle speeds. Speed cushions are a traffic calming measure similar to a speed hump but designed with wheel cutouts specifically to accommodate emergency vehicles like fire trucks (click here for more information on speed cushions). People riding bicycles downhill will also be able to use the wheel cutouts to avoid going over the cushion.

Bulb-outs are also proposed at various locations on the west side of Virginia Street. In addition to providing a visual narrowing of the road, the bulb-outs will also shorten the crossing distance for people walking.

Are you connecting the missing pieces of sidewalk on the west side?

We are working with our engineering team to try to add sidewalks in the three locations where they are missing on the west side: South Temple to 1st Avenue, 1st Avenue to 2nd Avenue, and Crestline/Fairfax to 11th Avenue. The addition of these missing sidewalk sections will not be easy as several factors complicate the design, including: lack of right-of-way, grade changes, and funding.

Why aren’t you adding park strips between the sidewalk and travelway?

Park strips are the landscaped areas between the roadway and sidewalk and are common in the City, especially in areas like this project corridor. Unfortunately, there are some sections of Virginia Street, both existing and planned, that lack park strips. The lack of park strips is due to the limited available roadway width in the corridor and project funding.

What are the proposed widths for the sidewalk, bike lane, and travel lanes?

Why is a bike lane being added on such a steep road?

The Pedestrian and Bicycle Master Plan, which is used to guide the implementation of bikeways in the City, identifies a buffered bike lane as the recommended bikeway type for Virginia Street. In addition, the project team reviewed the existing bicycling usage of Virginia Street and found that more bicyclists use Virginia Street than other principal north-south streets in the Avenues. In addition, a bike lane will add consistency and predictability for people driving as they won’t need to navigate around people riding bicycles uphill.

Why aren’t you installing a physical barrier between the bike lane and vehicle travel lane?

The transportation team evaluated the option of including a physical barrier between the uphill bike lane and travel lane. Ultimately, the option was dropped, in part because there isn’t consistently enough width to install features like curbing, the City hasn’t established a good mechanism for cleaning and plowing snow from protected bike lanes in this type of area of the City, and installation of a physical barrier would prevent uphill bicyclists from being able to leave the bike lane whenever needed in the case that there was an obstruction or they wanted to pass a slower bicyclist.

The cost for other types of bikeways, such as above the curb bike lanes and shared use paths, can be significant and exceeded the funding for this project.

Are more crosswalks being added?

Yes, we are proposing to add additional crossings at 1st Ave and Federal Heights Drive. Crosswalks will be striped across Virginia Street at 3rd Avenue and 11th Avenue.

Please note that the crosswalk at the church (approximately 275 North Virginia Street) will be removed and relocated to Federal Heights Drive because it does not meet standards in its current location as it leads pedestrians into driveways.

Will on-street parking be allowed on the east side of Virginia Street?

No. All on-street parking on the east side of Virginia Street will be removed. The roadway width used by the existing parking aisle is needed in this tight corridor in order to provide space for the other roadway elements included in the project.

The transportation team conducted a parking evaluation to assist in making the decision to remove parking. The number of parked vehicles was recorded during multiple hours of the day and compared to the existing parking supply. The demand for parking was low.

Will on-street parking be allowed on the west side of Virginia Street?

However, no parking will be allowed on the blocks where the sidewalk is being proposed: South Temple to 1st Avenue, 1st Avenue to 2nd Avenue, and the northern block of Crestline/Fairfax to 11th Avenue (although the project team is evaluating whether parking could be added on this block due to the wider roadway right-of-way). There isn’t sufficient width in these blocks to provide both on-street parking and the other roadway elements included in the project.

Why aren’t you installing roundabouts or traffic circles at intersections along the corridor?

The cost of a roundabout or traffic circle, for example at the 11th Avenue intersection or at the Crestline/Fairfax intersection, can be significant and during the concept development phase, priority was given to other traffic calming measures and connecting the missing pieces of sidewalk. If funding allows, the project team will consider adding roundabouts or traffic circles.

Why doesn’t the concept have everything that we asked for?

Due to the intersectionality of departmental jurisdiction over the public right-of-way, it is often unfeasible to execute the perfect plan for all entities. We feel that our plan reflects an implementable approach to meet the needs of many of those in the community and the City, while remaining within the project budget.

Thank you to all the residents that showed up in the cold and rain to provide feedback at our traffic calming event at Reservoir Park on November 5th.

The responses we heard have helped our team explore the positives and negatives of our preliminary design solutions/recommendations. We are currently refining these solutions, incorporating the issues that were identified and plan to have a draft concept ready for comment by early December.

Here are some highlights of the feedback we received at the traffic calming event:

Our team looks forward to hearing your comments on the draft concept and that will be available on this page once the details are finished. Thank you for all of your support and input. It will help this project reflect the neighborhood vision and create a coherent corridor for all users.

Thank you to all the residents that took our survey this past April and May.

Common issues identified by survey respondents were speeding, traffic noise, poor walking experience, missing sidewalks and too few places to cross the street, diverse problems related to the curve in the street between 1st and 2nd Avenue, lack of bike lanes, inconsistent stop signs, and some poor sight lines at corners.

Almost 250 residents and neighbors completed our survey. 40 survey respondents indicated they live on Virginia Street itself. Of these:

For the remainder of the respondents:

Frequently cited issues from everyone include:

Your comments and ideas will make the project so much better. Over the next few months, the City’s Transportation and Engineering Divisions will work on developing design solutions/recommendations for the issues that you identified.

To be added to the project email list for design and construction updates, please send “updates” to virginiastreet@slcgov.com.