What is the Emigration Creek Trail Connector?

The Emigration Creek Trail Connector is a proposed paved, shared use pathway that would provide opportunities for utilitarian and recreational trips on foot and by bicycle between Wasatch Drive, Foothill Drive, and Sunnyside Avenue (depending on alignment) in the area near Bonneville Golf Course. The trail would offer, as recommended in the East Bench Master Plan, “additional options for mobility within [and through] the community” and “a more efficient…connection to the University of Utah and Research Park”, two of the largest destinations for bicycle commuting in Salt Lake City.

“The name of the proposed trail has been changed recently (previously “Bonneville Golf Course Trail”) to clarify that it would or could (1) serve a broad population within and outside of the area near Bonneville Golf Course, (2) be part of a potential, future Emigration Creek area trail corridor, and (3) use different alignments than those previously proposed. 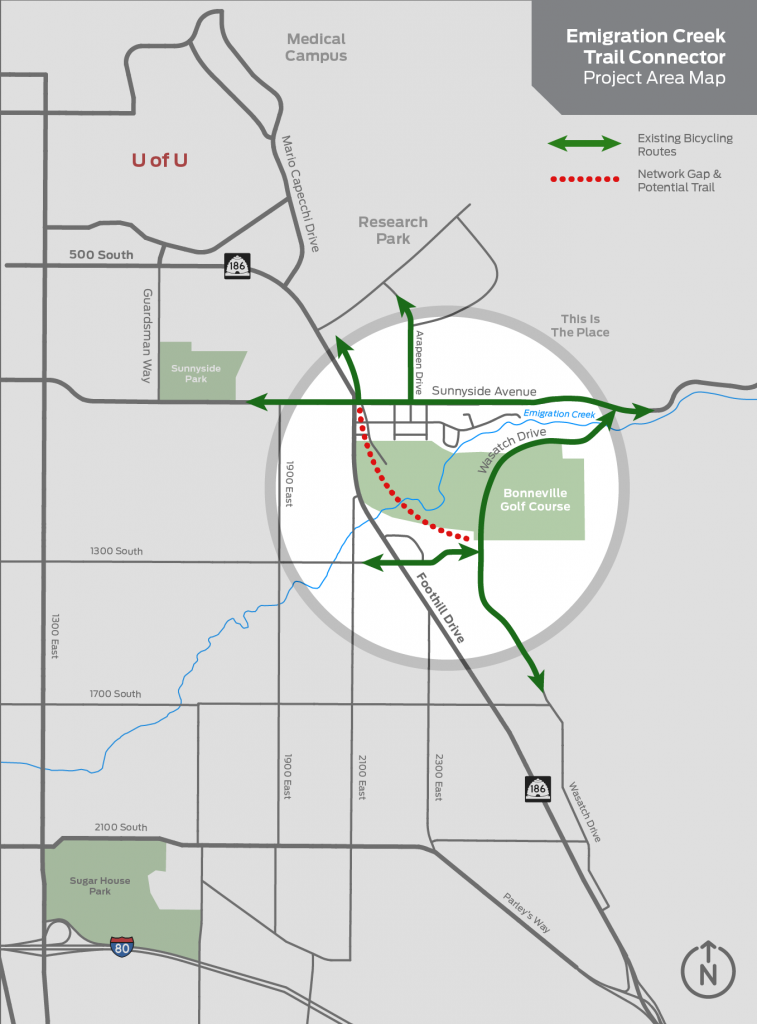 Is this a new idea?

The latter supports a “multi-use trail through the golf course [that] connects Wasatch Drive and Foothill Drive” and “links between the publicly accessible open space corridors” that would also “enhance East Bench recreational opportunities, protect wildlife habitat, and improve connectivity in the neighborhood.”

Why add a trail?

North of 1300 South, the only route options between points south and the University of Utah area are Foothill Drive or Sunnyside Avenue via Wasatch Drive. Users are required to walk or bike on a major road, and use energy for hundreds of feet of elevation gain and loss and/or out of direction travel. The proposed Emigration Creek Trail Connector would encourage more users to walk and ride a bicycle, instead of drive, reducing demand on the area’s major transportation corridors and parking demand on campus and at Research Park.

Depending on alignment, the trail could also provide a community asset for walks and bike rides in a more comfortable and calm setting.

What is the current project status?

The City and its partners are currently in the early development phases of the project. Collecting feedback will allow them to understand opportunities and challenges, and potentially select a preferred alignment and design the trail further. Construction would be anticipated to begin in two or three years.

To date, the City has heard concerns about conflicts between Bonneville Golf Course and potential trail users. The trail would be located and designed so that there would be minimal, if any, interaction between trail users, golfers, and golf balls. Essentially, this means choosing an alignment that avoids areas too close to fairways, tee boxes, greens, and existing cart paths.

To date, the City has heard concerns about conflicts between Bonneville Golf Course and potential trail users. If a golf course alignment is preferred, the trail could likely be located and designed so that there would be minimal, if any, interaction between trail users, golfers, and golf balls. Essentially, this would mean selecting an alignment that avoids areas too close to fairways, tee boxes, greens, and existing cart paths.

How much will it cost the taxpayer?

The City was recently awarded federal transportation funding to cover more than 93% of the costs to design and build a trail. Performing and paying for on-going maintenance, like sweeping, snow removal, and repair, would be the City’s responsibility.

How can I get involved?