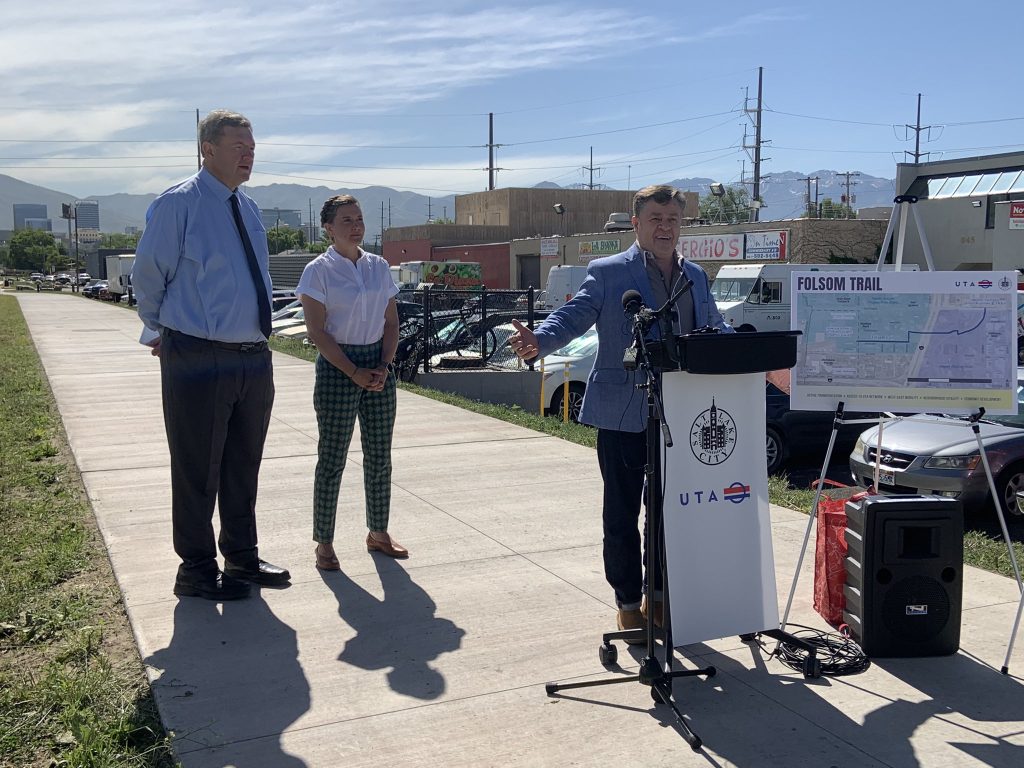 More than 10 years in the making, the Folsom Trail will help bridge east-west connections in Salt Lake City. This 10 foot wide path was designed to be safe for all ages and all abilities – to walk, bike, and more. This is a vital connector for our neighborhoods and our businesses.

This phase includes the concrete trail for walking and bicycling, 26 bollard and 10 pedestrian pole lights, trail delineation, street crossing improvements, and some site furniture (benches, trash cans). Other than seeding and restoring landscaping where it exists, this phase will not include landscaping (plants, trees, crushed stone) or irrigation. Those improvements will come next.

What is the Folsom Trail?

The Folsom Trail is an off-street, paved walking and bicycling path that was completed in 2022. It connects 1000 West to 500 West and the North Temple FrontRunner Station (solid blue line in the map below).

Note: Future phases may connect the trail to the river, will continue to study and design a potential City Creek daylighting north of the trail, and will overall seek to improve the vitality of the corridor. These future phases are not fully and/or currently funded.

The Trail will follow a former rail corridor from 500 West at North Temple to 1000 West, and hopefully, in the future, all the way to the Jordan River Bridge.

For the time being, the trail alignment west of 1000 West will utilize existing sidewalks and bike lanes on 1000 West, 200 South, and North Temple due to a short section of property near the Jordan River that the City is unable to acquire or legally access. Signage that users can follow will be installed in 2022.

The concept of an east-west trail from Downtown to the Jordan River Trail dates back more than two decades and is found in five adopted master plans, including:

In 2015, the Salt Lake City Transportation Division applied for and received Capital Improvement Projects funding to begin design of a paved, multi-use pathway along the route of the former Folsom rail line.

In 2016, the Redevelopment Agency (RDA) of Salt Lake City requested funding to assist in design and construction of the trail and greenspace amenities in the Depot District, an RDA project area.

The City Council awarded Parks Impact Fees to the project to assist in the development of a greenway corridor.

The Folsom Trail was included in a regional application submitted by the Utah Transit Authority for federal assistance in creating First-Mile and Last-Mile active transportation connections to transit.  The grant application was successful, and the project has been fully funded as part of the grant as of early 2017. The money previously allocated by Salt Lake City for this project will go towards the required local match for the grant.

In the Mayor’s recommended fiscal year 2019-2020 budget, $2.1 million were proposed for urban trails, nearly $1.1 million of which was intended for the Folsom Trail. In 2020, the SLC RDA approved nearly $350,000 in funding from several sources to enhance the lighting and landscaping of the Folsom Corridor.

In the spring of 2020, 1,053 residents and businesses told the City how to prioritize funding for lighting, landscaping, and other decorative elements. They wanted:

With a limited budget, the City has tried to implement as many of these improvements as possible in this first phase.

Find out how responses and demographics from everyone compared to people only on the west side, trail users, and residents and business owners by downloading the Microsoft Excel report.

The first phase of the project, which is currently on-going, focuses on trail design and construction that supports a safe and comfortable walking and bicycling connection for all ages and abilities. Future phases of improvements to the Folsom Corridor will explore options for encouraging redevelopment, expanding the focus on green space, ecological improvements, and water quality.

The City studied the feasibility of creating a small stream channel, or “daylighting” using the excess City Creek runoff currently in the Folsom Drain. Read the June 2020 final report of the feasibility study by clicking the link below. Currently, the City is exploring a design master plan for the daylighting.