Although climate change is considered a global crisis and impacts the security of the world’s nations, many of the natural resource, public health and infrastructure impacts associated with climate change are being addressed on a local community level.

Through a variety of efforts, including policy action, designing efficient buildings, implementing sustainable infrastructure, and managing alternative fuel fleets, Salt Lake City is working to plan for and mitigate the impacts of climate change on our community. 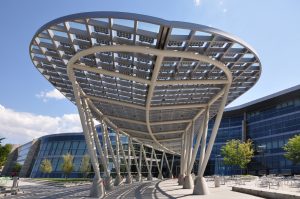 As part of the Climate Positive SLC goals, Salt Lake City and Rocky Mountain Power are committed to cooperatively seeking and implementing energy solutions that reduce emissions and align with community values of local residents and businesses. The City and Rocky Mountain Power signed a Clean Energy Cooperation Statement in August 2016 detailing goals, timing and scope for this vision.

In 2015, the City enacted the Comprehensive Energy Management Executive Order to identify and require the implementation of energy management best practices for large facilities and buildings. Benchmarking of the energy consumption of all City facilities 3,000 square-feet or larger is required on an annual basis. The Order addresses all aspects of City operations that require the use of electricity, natural gas or other energy resources in order to operate buildings, facilities or other fixed assets. Through implementation, Salt Lake City Corporation will reduce energy waste and better ensure the responsible use of City resources. By using less energy and simultaneously deploying clean, renewable energy resources the City will mitigate pollution associated with regional air quality issues and cross-cutting challenges such as climate change.

In 2015, the City enacted the Comprehensive Energy Management Executive Order to identify and require the implementation of energy management best practices for large facilities and buildings. Benchmarking of the energy consumption of all City facilities 3,000 square-feet or larger is required on an annual basis.

The Order addresses all aspects of City operations that require the use of electricity, natural gas or other energy resources in order to operate buildings, facilities or other fixed assets. Through implementation, Salt Lake City Corporation will reduce energy waste and better ensure the responsible use of City resources. By using less energy and simultaneously deploying clean, renewable energy resources the City will mitigate pollution associated with regional air quality issues and cross-cutting challenges such as climate change.

This Executive Order builds upon the City’s commitment to using resources wisely, including water, energy, and land. Every year the City invests $200 million in a wide range of capital improvement projects to update and improve infrastructure related to water, energy, lighting and other utilities, and transportation. Through this Executive Order, the Mayor has directed departments to coordinate with one another as City infrastructure projects are designed and implemented to ensure the City is prioritizing reduction in air and greenhouse gas emissions, reduction in resource use, and improving water quality.

In 2017, the City codified previous executive orders and policies into one comprehensive policy. It includes guidelines for everything from the energy benchmarking of city facilities, to guidelines for construction, vehicle usage, waste minimization, and hazardous material practices. Read the blog.

The Council approved the Energy Benchmarking & Transparency Ordinance, which is projected to save local buildings owners $15.8 million in annual energy costs and eliminate over 29 tons of criteria pollutants from Salt Lake City’s air each year. The market-based ordinance works by phasing-in new requirements for buildings over 25,000 square feet to “benchmark” or measure their energy usage annually. Visit the Elevate Buildings page to learn more.

In 2015, the Mayor and City Council adopted Joint Resolution 41 of 2015, urging Congress to levy a revenue-neutral fee on carbon in fossil fuels.

In 2019, the Mayor and City Council adopted Joint Resolution 15 of 2019, In Support of a National Price on Carbon Emissions, urging Congress to pass the Energy Innovation and Carbon Dividend Act. The act would impose a price on carbon emissions sufficient enough to reduce carbon emissions in line with ambitions detailed in the Paris Agreement on climate change. (see link on Infobase and PDF document)

The City’s commitment is demonstrated through its policy-level initiatives, changes in day-to-day municipal operations, and current and ongoing resilience efforts.

In 2006, Salt Lake City committed to trying to meet at least LEED Silver standards in all new City buildings and major renovation projects.  In 2017, the City’s Comprehensive Sustainability Policy specified that all City-funded new construction shall be designed and constructed to meet LEED Gold standards.

In 2013, Salt Lake City issued an Executive Order specifying that all new construction and major renovations of occupied city buildings containing more than 10,000 square feet will be evaluated for the potential to meet net-zero energy emissions standards. Where practicable, the building will be designed and built to this level of energy efficiency, with onsite (preferred) or offsite renewable energy included to provide an annual amount of renewable energy equivalent to the amount necessary to offset the CO2 emissions associated with anticipated annual energy use. Read more in the Comprehensive Sustainability Policy.

The City has been upgrading lighting and building systems in the City-County Building since 2001.  As a result of these projects, the City has reduced this building’s electricity use by over 840,000 kwh per year.  The City has also upgraded insulation on the extensive network of steam pipes that provide heat for the City County Building, Main Library, and the Leonardo Science Center.  This upgrade will reduce heat loss, and reduce natural gas consumption in the City’s boiler plant.

In 2009, voters approved the construction of a new Public Safety Building. It was constructed in 2013 and became the first public safety building in the nation to approach net-zero status. It received an Energy STAR store of 100 and also received LEED Platinum status. Read more about its building analytics and energy savings in this U.S. Department of Energy Better Buildings case study.

In May 2018, Fire Station #14 opened and became the first Net Zero Energy fire station in the country. Station #3 in Sugar House opened in October 2018 and became the second.

In 2006, the City began construction of the Sorenson Unity Center to provide services, programming and recreation facilities to the Glendale community.  In keeping with the City’s commitment to energy efficiency, the Unity Center includes a variety of energy efficient elements including enhanced use of windows and skylights for lighting, heat pump and gas assist technologies, low-e windows and a reflective roof.  In 2009, the City received LEED Silver status for the new Unity Center.  The City currently is pursuing a Silver rating for operation and maintenance of the Unity Center as a LEED-Existing Building. In 2020, 360 solar panels were installed.

The new Public Services Maintenance Facility, completed in 2010, is LEED Silver standard certified and is expected to cut the Fleet and Street Divisions’ building energy consumption by more than 50%.

In May 2009, the City replaced the old tar/gravel built-up roof on the Parks Building with a new white membrane (cool) roof and better insulation.  On average, in the first two years since replacement, the City consumed 36,700 kwh less electricity per year– a 10% average reduction compared to the year before roof replacement.

Salt Lake City has converted all of the traffic signals to LED lights—saving more than 1,700,000 kwh and $100,000 per year. Replacing the 1,445 the yellow traffic lights alone will save a total of 76,730 kwh and $4,950 each year. In addition, Salt Lake City has begun a long-term program to convert all streetlights to high efficiency fixtures over the next 15 years. The city replaced 1439 standard 250 watt cobra-head style street lights with LED cobra-head style street lights in various locations throughout the city.

Salt Lake City has invested in solar energy for over a decade. See below for the list of buildings with solar arrays. Our distributed solar projects plus the Subscriber Solar subscription resulted in 14% of Salt Lake City’s municipal electricity use coming from solar energy in 2017.

In 2020, Salt Lake City finalized an agreement on a project with five other large energy users and Rocky Mountain Power to build a large 80 Megawatt solar farm in Tooele County to meet our goal of powering at least 50% of municipal electricity use with renewable sources. This goal was set in 2016 (see joint resolution here).

The Elektron Solar Project broke ground in 2021. It has been delayed due to numerous federal tariff and trade challenges affecting the solar industry, but it is expected to come online by 2024. When it comes online, Salt Lake City’s share of the energy will be equivalent to approximately 90% of our municipal metered electricity consumption in 2019. See Elektron Solar press release here.

The Salt Lake City Solar Farm began generating clean electricity in June 2014. The project includes roughly 3,000 solar panels spread across four acres just west of downtown Salt Lake City. The installation is the largest ever completed by Salt Lake City Corporation and its electricity is being credited to the Public Safety Building in order to achieve a Net Zero energy goal. The panels will produce over 1.2 million kilowatt-hours of electricity each year.

The roof of the Public Safety Building is covered by over 1,000 solar panels with a total capacity of 350 kilowatts. These panels complement a 30 kilowatt solar canopy that shades visitors entering the building and help the project achieve net zero energy status. In addition to providing power for daily operations, 30 percent of the rooftop solar panels have been wired to provide emergency electricity directly to the building in the event of a power blackout.

Plaza 349 is home to a variety of municipal operations, including Engineering, Transportation and Technology. The work of these employees is now powered in part by clean, renewable energy thanks to a funding award from the Rocky Mountain Power Blue Sky program. The City used Blue Sky Community Project Funds to place 136 solar panels atop the roof of this recently renovated building. Explore this project’s real-time solar production data.

In 2017, Salt Lake City installed 756 solar panels on seven facilities, including five fire stations, the Pioneer Police Precinct, and a restroom at the Regional Athletic Center. The estimated 320,000 kilowatt-hours per year will eliminate the equivalent of 8 million pounds of coal from being burned over the panels’ 25 year warrantied life. Learn more.

The Glendale Library features a 44 kW array with a 61,600 kWh estimated annual output.

The Marmalade Library features a 13.5 kW array with an 18,900 kWh estimated annual output.

In 2011, the Leonardo installed 148 panels in a 30 kilowatt system. Read press coverage.

In 2018, the Sorenson Unity Center received a Rocky Mountain Blue Sky grant to partially fund the installation of solar on the community center’s roof. The 115-kilowatt system, featuring 360 panels, was installed in 2020. See the monitoring website for solar energy output on the Sorenson Campus here.

Salt Lake City is pilot testing the use of solar hot water in one of the City’s fire stations. Because fire stations use high volumes of hot water every day, significant energy can be saved by using the sun’s energy to heat the water instead of natural gas. In 2011, Salt Lake City installed its first solar hot water system on Fire Station #8, adjacent to the Spring Mobile Baseball Stadium on 1300 South. To date, the City has saved $574 in energy costs.

Turning Methane into Energy at the Water Reclamation Facility (2005)